Day #181 Make up and everyday life 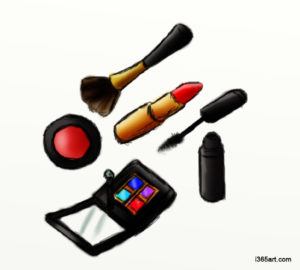 I just realized like a day ago that I’ve never been a real big make up wearer. I think in a sense, I was kinda of turned off from make up at a very young age. When I was about 6 or so, I remember playing with my mom’s make up stuff one day. I thought it would be a cool idea to make myself look mature. At the time, I thought that being a grown up was completely awesome! I thought that it represented freedom and being able to do whatever you want, only to find out later that it was actually the exact opposite. x.x

So there I was, playing with all of the lipstick, eye shadow and mascara. I put some lipstick on and looked in the mirror (in horror). At the time, I thought I looked like a duck with make up xD. I sometimes wonder if I was on to something back then, since the word “duck face” now exists xD. To this day, I have no idea why I felt that way but after that incident, I rarely ever wore make up (especially lipstick) again. I do admit that I do use make up of another kind from time to time. I am a cosplayer so I often times have to paint my face with theater make up and paint. But if I can help it, I try to avoid using any at all.

So that’s my little story for today. I made a drawing consisting of various types of make up just for fun and to help tell the story a little better. ^^