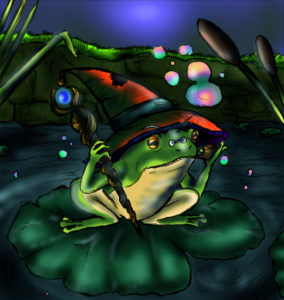 It is officially the second day of this blog being alive. I’m still pretty excited about this blog and I really can’t wait to start pumping out even more artwork as the day goes by. I’m also hoping to improve on my skills along the way as well. There’s always room for improvement after all.

As you all may have already noticed, the site is still under heavy construction. I have a really busy schedule over here so I’m doing my best to get this site together. I’ve already added some more categories to it and will be throwing in some more useful content in the near future. One thing that I would really like to do is provide some useful and interesting art tutorials as well. I’ve never really done that sort of thing before but I have some stuff I want to share later on.

Anyway, on to the picture. My boyfriend mentioned something about a frog character a few days ago so I decided to do something creative involving a frog. Since the background of the drawing looked kind of blank, I added a swamp backdrop later on. When I think of a swamp, it’s always in the night time for some reason…lol!

I remember seeing something like this in a Final Fantasy game I think (forgot which one) so that was also another key inspiration for this drawing. I’m kind of in to fantasy/medieval  themes so a drawing like this would have been inevitable. I’ve watched way too many fantasy movies for my own good. At the time of this drawing, I was feeling pretty exhausted. I’d just gotten home from working and all I felt like doing was getting under a big blanket and staring at my computer monitor all night, which I ultimately ended up doing in the end.